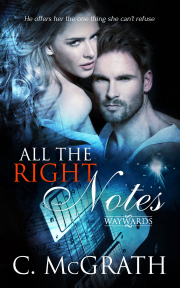 All The Right Notes

Book 1 in the Waywards series

Sexy, charismatic rock star Milo Knox is known for several things—his music, his excesses and not taking no for an answer. So when beautiful blonde college grad Grace Morrison steps into his life, only to tell him she’s not interested, he offers her the one thing she can’t refuse. Her dream job. Working as a publicist for her favorite band, which also happens to be his own, the Waywards.

The Waywards were the darlings of the ’90s, before Milo’s substance abuse issues and personal demons drove them into obscurity. Now clean and sober, he’s determined to make a new start. Both with the band and with Grace, if she’ll just let him—and let herself live her own life, free of the shadows of her past. But old sins cast long shadows and the past rarely stays buried. In their case, it threatens to tear them apart.

Milo Knox thumped the door to the dressing room Conner wouldn’t come out of. He’d dealt with his bandmates being temperamental before. It came with the territory of being in a rock band. Except this time, he couldn’t afford that kind of shit on the opening night of their first tour in years.

“C’mon, man,” Milo pleaded, “you agreed to do this tour. I need you. Zach needs you. The band needs you.” He hated how pathetic his words sounded. He ran his hands through his shaggy black hair and waited, tapping his fingers on his hips.

The door opened and his bassist stood there, looking very much like the addict he used to be. Withdrawn, pale, with bags underneath his eyes. Despite years of rehab and ‘therapy,’ he still couldn’t fully kick his old habits. His hands were trembling, his blue hair a mess and his eyes wide.

Milo grimaced, hating seeing his old friend worn so thin. He’d known the tour would bring back their painful past—he had hoped they could keep things together longer than one night.

“Yeah, you can,” Milo said, smiling as he patted him on the shoulder and pushed his way into the room, closing the door behind him.

“I want to be someone else,” Conner mumbled, “anyone else. But me, as Conner Leery… I can’t go out there and perform. Because everyone is going to know what I did. There’s no way everyone’s forgotten.”

Milo sighed. It always came back to their past mistakes. Can’t we ever leave the past behind? “Sooner or later, man, you’re going to have to forgive yourself. Because you did nothing wrong. You were protecting me from my bitch ex-wife. She was trying to kill me. You stopped her. You saved me. And you served your time. All twelve months of it. Rehab, jail…it’s all the same. Now stop punishing yourself.”

Conner scratched his arm nervously. “I don’t understand how you can be so calm about this. I know we don’t know exactly what happened—probably never will—but Virginia? I know what that girl meant to you. I know…” He shook his head.

He hated talking about her. It made him feel as if he was coming out of his skin. “Forget about it, man,” Milo said, squeezing Conner on the shoulder. “It’s all in the past. The only person responsible is Aria. She got you hooked on drugs, too. I believe she wanted to kill me and you stopped her. It happened, and there’s nothing we can do to change that. Only accept it and move on.”

“Have you accepted it?” Conner asked, his brow furrowed in worry. “Because if you blame me, even for a second, I won’t do this tour. I won’t perform with you again until we’re okay.”

Milo clenched his hands into fists. “Dude, I swear. I know you’re trying to make amends and shit because that’s part of your process. But we are good. You never mention this again. I’ll never mention it again. You’re my brother, man.”

“Brother… Things only worked in our favor because my bitch of a politician mother ‘intervened,’” Conner muttered, his tone bitter. “Anything to save face with her beloved Conservative party. I’m telling you, we shouldn’t do this. It’s not going to end well. Someone’s going to bring it up again and it’s only going to cause more trouble.”

“We’re not canceling the tour,” Milo hissed. “Now, look, you want to make this up to me?”

“You know I would do anything it takes,” Conner answered. “Anything.”

“Good! Then get your fucking ass out on that stage, all right? Put all of this bullshit behind us.”

“I don’t deserve this,” Conner said, hanging his head. “And Zach…what if I fuck things up again with him?”

“You won’t,” Milo assured him. “Zach’s happy with Nigel. You two keep it professional and everything will be fine. Find yourself a guy. Find yourself a girl. I don’t care. But right now, we’ve got to go out there and put on the best concert we possibly can, all right?”

“I don’t deserve this,” Conner insisted again. “I shouldn’t get a second chance.”

Milo rolled his eyes. “What do you want to do? Spend the rest of your life rotting in prison? Because I could tell the cops about the weed you’ve got. Though it probably won’t be life they put you in for.”

Conner locked eyes with him. “I only want to feel happy, man. Doing this again…it feels like everything could fall apart at any moment. I know everything’s been taken care of. I know it’s been years. I know Aria’s in prison and can’t hurt us again. But being back here…it’s like I’m a circus elephant and everyone’s waiting for me to mess up.”

“You won’t,” Milo insisted. “I’ll make sure of it. Now, you are not a killer, do you hear me? Aria used you the way she used everyone. Let’s go play, all right?”

“Yeah, sounds all right to me,” Conner agreed. “What’s the worst that can happen?”

“That’s the kind of attitude I like to hear!” Milo pushed him out of the dressing room. “Anyway, you’ve got nothing to worry about. Remember, I made sure we’d be protected. I’ll always protect the people I care about.”

Conner smiled, the first genuine smile Milo had seen on him since they’d started working together again. Then Zach, their drummer, appeared, looking furious. “Where the hell have you two been? We’ve got a show to perform, in case you’ve fucking forgotten, and I am not here so we can be fuck-ups again. If I have to read another fucking tabloid story about how we’re vintage, I’ll punch a fucking journalist.”

Milo laughed. “Well, at least that’ll get interest. But if you’re going to punch someone, make sure we get a good picture. That’s a few thousand tweets right there, and we could use all the publicity we can get.”

“What were you two idiots doing in there anyway? I swear, if either of you shits is wasted or stoned, I’ll fucking kill you,” Zach threatened, glaring at them.

“Only a pep talk, man,” Conner assured him. “A little pep talk.”

Zach shot narrowed-eyed glances from Conner to Milo. Suspicion clouded his old friend’s gaze, and Milo felt almost guilty for not having brought him in on the pep talk. All it took was for the two to be in the same room and the tension became almost a living, breathing thing.

“You know, you could have asked me to help you. Things might not be like they used to be, but that doesn’t mean I don’t care, all right?” Zach said.

Zach sounded almost bitter in his reply, and Milo knew he’d have to talk to him later. The last thing he needed was Zach being temperamental too.

On a different night, Milo might have been worried about the fact that Zach’s gaze never left Conner’s back as he walked ahead of them. Or that he was on God knows what, and the last time the two men had seen each other in a non-band-related capacity it hadn’t ended well. Instead, all he could think about was whether or not he could remember the chords to songs he hadn’t played in years. Or if they’d actually have an audience to play them for… 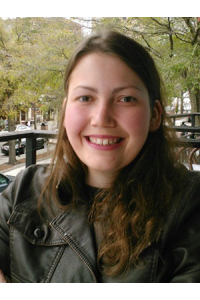 C. McGrath is a proud California Girl with a Montana base (currently, though she’s always daydreaming about a beach). She’s the proud owner of a small record collection and more paper and journals then anyone could ever need in a lifetime. If she isn’t writing, you can find her binge-watching documentaries or crying over Parks and Rec  for the millionth time.

She writes because she found herself in books and wants to help do the same for others. These characters are bits of her, and the people she knows, or knows about. These are her and their stories.

And she hopes you love reading them just as much as she did creating them.

Share what you thought about All The Right Notes and earn reward points.

Other books in the Waywards seriesView Series Page