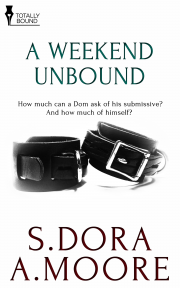 How much can a Dom ask of his submissive? And how much of himself?

For Derek and Tyler, Dominance and submission have been part of their love right from the first hello. But now Derek wants his submissive to go as deep as he is physically and emotionally able to. During two days and two nights, there are no safety words and very few limits. This is their chance to demonstrate their love for one another through the most extreme scenes they’ve ever played.

There is, however, one rule to trump all others for Tyler—to protect Sir’s most loved possession, even if it means disobedience or going against his own need to submit to his Master without question or complaint.

This weekend will open up levels of their relationship they’ve never dreamed of before.

Tonight it was going to happen. Excitement hummed and reverberated through Derek’s body because of what he was about to do during the next two days and two nights. There was no point in denying that part of him was scared, even lonely, but despite that, this was what he wanted. The Dominant inside Derek, the part of him he had left sorely neglected before he’d met Tyler, had come fully alive during the past year, and Tyler had reacted to every new step in this dance with great enthusiasm.

Without realising it, he started to play with the paper bag that contained the surprise he had bought for his lover and submissive, then he took the thin strip of leather from the bag and placed it on the table between himself and Tyler.

There was hope in Tyler’s eyes, hope and questions. Confusion.

“If you are able to answer all my questions affirmatively, and I do mean every single one of them—and no, none of it is negotiable—this collar will be yours from now till Sunday midnight for the most intense scene we are psychically and psychologically able to manage.”

“You mean that I’m allowed to stay in submission? Every hour? Even when I sleep? We never did that before, so please tell me I’m not misunderstanding you.”

“Wait till you hear the questions. You might not be so trigger happy then,” Derek chuckled.

Derek wanted to run away. He wanted to take Tyler in his arms and forget this silly business. A scene during a few hours was one thing, but a whole weekend? There were enough fun ways to spend free time with the man he loved. But then he saw his lover’s face and he remembered the attic room they had, the one that no one else knew about apart from the two of them, and he realised he had chosen this path long before today.

“Okay, I’ll ask the questions. Remember, I’m asking them as Derek to Tyler, not as Sir to his submissive. Once you have chosen for the collar, we get a completely different situation. I have a lot of questions and all I need to hear from you is ‘yes’ or ‘no’.”

“You promise to be obedient—totally and without any reservations—in all that I order you to do or ask you to refrain from?”

“You accept the punishments I choose to give you without question, even if you believe they are unjust? The rewards, no matter if you truly appreciate them?”

“You accept that I will make all decisions in all aspects of your life for the next two days, no matter how insignificant, intimate or embarrassing?”

“You accept that you don’t have the right to initiate anything or stop anything without my explicit permission?” This was an important rule and one that was fairly new to them both, so Derek watched Tyler’s reaction, but the kneeling man showed no hesitation.

“You accept that you are allowed to politely ask me for an explanation if you don’t understand a certain order, but you have no right to question the order as such?”

“You accept that your body belongs to me in all aspects and I can use it in any way or manner I like or see fit, regardless of how you think or feel about what I do to you and ask of you?”

“You accept there will be no safe words? I can and will pause any activity when I see it’s too much for you, but I will decide if and when it fully ends.”

“You promise me that you will inform me about any health and safety problems or any other problems that I don’t mention now but are perceived by you as such, even if it means ignoring any or all of the other rules? In short—you promise to take good care of my most treasured possession, namely you?”

“You promise you will intently listen to the words I’m going to say to you, and ask any questions before I allow you to wear my collar?”

“I promise I will respect the hard boundaries that are known to both of us. I will not humiliate you in front of others, be they friends, family or strangers. I will not permanently mark you. I will not let others make use of you in any way or manner. I will not ask others to join us.” It was something they had talked about, but that wasn’t what this weekend was about. “I promise I will provide care and protection whenever needed, or ask others to provide such care if I’m not able to do so sufficiently. You have the right at any moment to end this temporary contract and return to our normal life.” This was it, and Tyler’s tense body showed his understanding of the moment. “I hope you know that I love you more than I’m able to say.”

“I’ve heard you and understand everything you’ve said. As soon as I am collared, you own me until that collar is being taken off again. I have answered yes to all questions,” Tyler said calmly and without any hesitation. “I love you too, with all my heart. I hope you decide I am ready to be collared.”

Derek took the simple, unadorned piece of black leather in his hands. “I decided you deserved a special one for this weekend, not the one I use on you when we do a scene.”

“You may kneel in front of me,” Derek said with a tenderness in his voice that almost scared him. This was it.

Tyler did as he’d been told with pure joy on his face.

“It is now Friday, a bit over six in the afternoon. I, Derek Anderson, will put my collar on you, Tyler Wright, as a sign of my ownership over you. This will end Sunday midnight or any point in time earlier if the need arises by either of us. This choice can be made only once during this weekend. It’s all or nothing. Please state you do this out of your own free will and without any pressure.”

“I, Tyler Wright, accept the collar you, Derek Anderson, are giving to me. You haven’t pressured me in any way or manner and I know I can end this contract any time I want with or without a reason. I love you.”

The leather was very soft, the buckle simple, but well made. Derek knew it would fit Tyler comfortably for as many hours as they wanted him to wear it. When he put it around Tyler’s neck, he knew he’d been right.

I have been reading gay erotica for over 15 years now and I’ve been writing it for a little under ten years. I’ve always had an interest in Dominance and submission, and my writing reflects how my thinking about the scene has evolved. I live in the southern United States, an area not incredibly open to alternative lifestyles, and the internet has been my salvation. I spent about six months working on a website, designing tease and denial games, and it is still one of my biggest kinks.

Share what you thought about A Weekend Unbound PRINT and earn reward points.