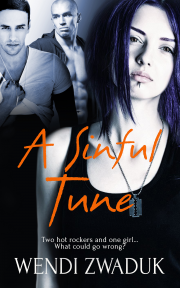 Two hot rockers and one girl…what could go wrong?

Robbie thought when he formed his band he’d get the girls, the gigs and the money. He’s got the gigs, but the money is a little slower in coming. He’s also got more than a few secrets. He wants the band to succeed, but even more, he wants to find the one woman who can accept him—warts and all, but also with his best friend Dillon involved.

Dillon loves Robbie like a brother. Robbie’s his other half in the music world. He handles the words while Robbie writes the music for the band. But all the music in the world isn’t enough if they don’t have their perfect third—Jess. She hits all the right notes for him and Robbie. The only issue? She may not accept their love in return.

Jess has followed the band for years and worked her way up to selling their merchandise. She knows their music almost as well as they do, but doubts they’d want to be with her. She’s so unlike the other women they’ve had—she’s short, curvy and a purple-haired Goth. When Robbie and Dillon hang out with her after one of the gigs, she has a choice to make. Either head home and wonder or let go of her fears and give the two men of her dreams the chance to make her fantasies come to life.

Dillon Tyson sat on the stool in the dressing room area of the Salt Ring and tuned his guitar. He both loved and hated the late-night sessions at the bar. Loved them because he could play acoustic guitar and riff with his best friend, Robbie. He could try out new songs and fiddle with them until they worked. The crowd was thin and quieter, but he appreciated the lower-key setting. But he hated the late nights because he didn’t have someone to go home to…other than Robbie. They shared the second floor of a house, a bathroom and women, but nothing else.

He strummed the guitar again and sighed. Almost in tune. He glanced over at Robbie. They’d been through the fire together. Robbie had been there when Dillon’d been at rock-bottom with his drug use, and stood by him as he recovered. Four years on, they were still tight and had the band going, playing some of the bigger venues. Tonight, he’d be able to play his latest tune and work with Robbie to get it just right.

“Of course.” Dillon ran through a set of scales to limber up his fingers. He closed his eyes and played a snippet from one of his songs, Collide. “He jumped ship as soon as he could because he didn’t want to schlep the drums into the supply closet.”

“If we didn’t need him on rhythm guitar, I’d so fire him.” Robbie drummed on the wall. “But most of the crowd left, too, so what can we do?”

“I don’t know.” He stopped playing and sagged on the stool. “How’s Elaine? I haven’t seen her around the apartment in the last couple of days.”

Robbie froze. “She left. She pulled a middle-of-the-night escape kind of thing two nights ago. She took the money I had hidden in a boot in the closet, my good amplifier and a print of a Monet painting. All of her clothes, shoes and that awful fur coat are gone. No note, just gone. I thought you knew. You hadn’t said anything.”

“I wondered why I hadn’t seen her, but I guess I appreciated the quiet too much.” Dillon folded his arms on top of his guitar. His heart ached for Robbie. Elaine hadn’t been good for his friend, but he wasn’t about to tell Robbie that. Personally, he was glad she’d gone. “Why would she want that old art print?” Of the inventory of things to take, an art reproduction seemed silly. “Did you have cash stuffed in the frame or something?”

“No.” Robbie shook his head. “She told me last week that I was uncivilized and if she ever left she’d take the one decent thing I had just to teach me a lesson.” He laughed. “Because taking my money was so civilized. After two years together, you’d think I would’ve known she’d pull something like this.”

“You’ve got more money, right?” He resumed playing, but this time he focused on the tune in his head.

“Sure. I put that cash there to see if she’d take it, and she proved me right…unfortunately. I’m better off without her. She hated the way I talked to you and Jess all the time. Christ, you’re my bandmate and writing partner. Jess does our merch. If I don’t talk to either of you, the band will have problems. I’m sorry, but I couldn’t trust Elaine with merch money and she can’t write music.” Robbie pulled his cell phone from his back pocket. “Fucking shit.”

“What?” Dillon left his seat. He peered over at the screen. “Who texted you?”

“Elaine. She thinks I’m not trying hard enough to get to the next level. She’s sorry she left me and wants to come home because she has ideas to help us.”

“Bullshit. She doesn’t know the first thing about helping us.” Dillon shook his head. “Anyway, I’m not letting her in.”

“Neither am I. If I don’t reply, maybe she’ll get the message.” Robbie sighed and tucked the phone into Dillon’s guitar case. “One of these days, I’ll find the right chick.”

“You mean we will?” He stopped strumming. “There has to be a woman out there who wants to be sandwiched between two hot rock stars.” He had his sights set on one particular woman, but he wasn’t sure she was interested. He’d kissed Jess so many times and wanted her, but would she want him, too? Would she want Robbie?

“It would help if we were rock stars.” Robbie nodded. “But if that was the case and we were, then Carol and Elaine might have stuck around. I don’t know about you and Carol, I’m happier without Elaine.”

“My life has a lot less drama. Those two wanted what they thought we were going to become.” Dillon stood and wrapped his fingers around the neck of the guitar. He glanced through the doorway to Jess and the table full of their merchandise. Of all the women he’d dealt with, she’d never made a move on him or Robbie, despite all the times they’d hugged and kissed her. She hadn’t expected anything from them, either. He’d wondered about her many times. What if they asked her out? Would she agree? She’d come along for drinks after gigs. He’d fantasized about her a few times, and whenever she touched him—even if only to hand him a tally sheet—his skin tingled. “Hey, Rob?”

“Yeah?” Robbie stepped up beside him. “Who’d you spy? Or did I forget something? Please, Jesus, tell me Elaine didn’t show up.”

“Nah. She’s probably long gone,” Dillon said. “No, tell me, who is the most loyal person in our lives?”

“Loyal? Not Phil.” Robbie scrubbed his bald head with his hand. “Probably Jess. Why? What are you thinking?” He folded his arms and tucked his drumsticks to his chest. “I like Jess, too, but I doubt she’ll want us.”

“I don’t know. Jess comes in, does her job—for which we can’t pay her much. She’s not stealing from us and hasn’t begged for cash or sex.” He nodded toward where she sat. “She’s been a gem and we’re both attracted to her.”

“True.” Robbie nodded. “What are you getting at?”

“She’s cute.” He tapped his thumb on the side of his guitar. Strike that. She is sexy as hell. “I don’t understand why we haven’t tried to make another move on her.” Adorable, sweet, luscious… Jess was a catch. He’d be lying to himself if he said he wasn’t interested in her. “I want her.”

“I don’t think she wants either of us.” Robbie leaned into Dillon and watched her. “If we told her we were interested in her, she’d think we want her as part of the harem. That’s not true, but she’s seen the craziness that surrounds the band. She’s probably leery of us.”

“What if we asked her out? We’ve been dancing around it forever. You want her. I do. She likes hanging out with us and she never shies away when we kiss her.” He met Robbie’s gaze. “I’m serious. What if we were the ones who took the first step?” 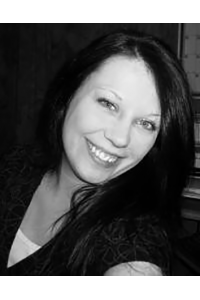 It had some good ménage scenes and musicians, crazy exes, and unsure-about-their-body-type leading ladies.

Share what you thought about A Sinful Tune and earn reward points.